Archero is a game that is loved by millions of users. This is an RPG archery game that empowers you to fight with monsters until you reach the boss. And if you’ve ever wondered if there are any alternatives for this game, keep reading this article!

There are lots of games like Archero for Android and iOS that are equal to the original. These games have similar gameplay, great visuals, and tons of entertaining levels!

Here’s the list of 10 best games that category that worth your time. Have a look!

Let’s start with a game called Arcade Hunter. This is a fantasy game that feels a lot like Archero.

This game empowers you to fight various monsters using a huge arsenal of weapons. You start with the simplest armor pack but you can improve it while moving through the rounds. Wherein, you can loot some gold and armor to improve your overall skills. Plus, there are lots of entertaining challenging boss fights going on every few levels.

Herewith, you can choose to fight demons by your goodwill or for gold. To win a fight you need to combine your sword, the hardware, and magic. You can also explore multiple dungeons to hunt gold chests and other treasures. Each dungeon has unique hordes of beasts and a boss waiting for you in the end.

For each victory, you will get rewards that get bigger hen you defeat the boss. Besides, there are various armors you can try, and some of them are quite unique. The game has lots of levels so it will keep you busy for a long time. The visual of the game looks impressive as well and the game has a pleasant soundtrack.

The second Archero alternative is called Archer’s Tale. This is an RPG game that takes place in random dungeons.

In this game, you play the role of the archer hero and your aim is to become the master of arrows. Thus, the game covers various types of arrow armor — from bow to crossbow and more. Besides, you can explore various dungeons and mazes and crush beasts that cross your way.

Each dungeon has its own monsters waiting for you and all of them have unique powers. Plus, there’s a boss at the end of each dungeon you need to destroy. You can also take parts in battles against hordes of monsters. As for the weapon, you start with the simplest pack that can be improved when you’ll move forward in the game.

Herewith, you can use arrows related to elements like fire or water, settle the speed of your attack sand even use multiples arrows at the same time. You can also improve your capes and helmets to lessen the damage you get attacking beasts. Besides, you can use magic spells to level up your attacks. 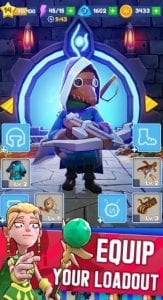 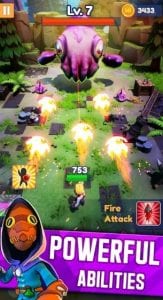 Hunter: Master of Arrows is the action game that challenges you to defeat evil forces.

The whole game is about developing your hero. You start as a newbie archer with not so many powers and you improve it while moving through the levels. Each level empowers you to face new monsters and demons — from griffins and ogres to skeletons.

Sometimes there are even waves of beasts coming after you and you can only destroy them all by improving your skills. The beasts are spread between dungeons and other world’s locations and your aim is to find and kill them all. There are also bosses at the end of each level and you get generous rewards for layering it.

As your power level keeps growing you also unlock new types of attacks that help you stand against beasts. There are various types of arrow weapons in the game so you can even try crossbows. Besides, you can improve any skill of your hero from the speed of attack to the shield and more. The graphic is very realistic in this game and it also has lots of levels.

Monster Killer is a game in a Victorian setting with the gameplay comparable to Archero.

As you can see by the name, this game takes you in a place of an assassin that needs to fight against gangsters and beasts. The visual of this game is very impressive as it brings you into the darkly mysterious atmosphere of 19 century London with its narrow streets and all that. But when the night comes the city fills in with evil forces you need to stand up against.

On top of that, you need to fight both bandits and magical creatures so you need to develop all your skills at the same time. Each villain has its own fighting methods that you also need to consider. You start with a basic weapon pack but you can renew it while going through the rounds.

Your aim in the game is to kill all the monsters in London’s suburbs and it takes quite a lot of time. As for the weapons, you gave lots to pick from as there are revolvers, bows, crossbows, blades, and chakrams. The game also has powerful bosses that are challenging to the slayer. There are also various locations that won’t let you get bored with the game. 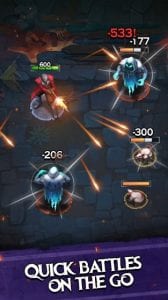 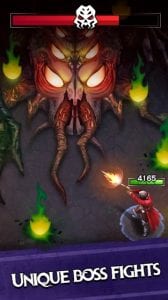 Archer’s Adventure is another Archero alternative that won’t leave you cold.

This game puts you in a place if an archer that need to battle against evil hordes. You get more and more monsters with each level, and they also get more robust. Then, you’ll get into a boss fight that is quite challenging to win. As always, you start with the simplest hardware and not so many skills but you can upgrade it while going through the rounds.

Every successful round brings you reward and gold chests that you can spend on improving your armor or powers. You can also develop specific skills only and there are no restrictions for that. The arsenal of weapons in the game is quite huge as here are bows, blades, crossbows, and more.

Plus, each monster you face has its own strengths and weaknesses you need to consider. Herewith, you can also get helpful stuff and renew them to level up your powers and protection. Thus, you can loot various helmets, capes, and shoes that make you quieter.

Tales Rush is another game that is comparable to Archero by the idea.

The setting of this game looks like a fairytale and you have to heroes who will fight upon evil. These heroes are the only ones who can save the world from monsters.

As always, you start with the basic hardware pack and low powers so it’s a challenge to even beat one beast. However, you can renew your powers and hardware while moving forward in the game so you can kill waves of monsters at once. Each journey empowers you to loot gold and helpful items that will raise your powers and help you beat monsters.

Every monster you face has its own strong and weak points that you need to consider. Thus, you will need to pick a tactic and fighting methods for each monster you get to fight. The visual aspect of the game is also nice so it’s a pure pleasure to play it. In case you stuck on some level you can use hints that will advise you how to beat the enemy.

Butchero is an action RPG game that empowers you to fight upon evil armies until you beat them all.

The whole idea of this game is comparable to Archero so it is a full-on alternative. Your point in the game is to beat your attackers level by level till you reach the boss. You start with basic armor and low powers that you’ll need to develop while moving forward in the game.

Plus, your enemies will also get stronger with each new level so it will always be a challenge to destroy them. Besides, you can collect gold and items that enhance the powers of your attacks. You will also get rewards with each successful round so it won’t take long to expand your strengths.

Herewith, the game also has a huge arsenal of arrow armor — from basic bows to more complex ones and even crossbows. You can also set the tactic of you to attach and shot with several arrows at the same time. Furthermore, you can boost the talents of your hero by making the health stronger, attacks faster, and all that.

Hit And Run is an adventure game about archers that aims you to battle with monsters.

The idea of the game is simple — you fight with new monsters round by round and sometimes you also face bosses that are hard to kill. In the beginning, you have the simplest arms and low skills so it will be hard to even kill one monster.

But your hardware and skills will be developed while going through levels so it will get easier to stand against beasts. Wherein, the strength of monsters you face will also grow with each level so the fight will never get too easy. When you’ll start enhancing your powers you will be able to combine them to come up with outstanding fight tactics.

Plus, the game covers more than a hundred unique skills and powers so it will take you a while to enhance them all. Sometimes you’ll even need to stand against waves of monsters that seem to be endless. The came can give you for up to 99 waves one bu one to see how many you’ll be able to defeat. 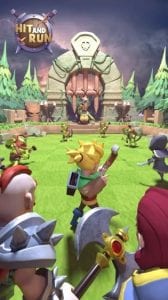 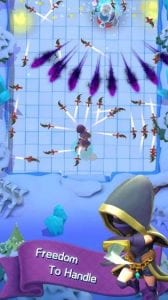 Archery Hero: The Next Generation

Archery Hero is the Archero alternative that brings you in the medieval fantasy world that needs to be saved from monsters.

As you can already guess, your aim in the game is to battle monsters round by round until they are all gone. Your weapon in the game is the bow and arrows and you will need to fight beasts and release people who they keep hostage.

When the game starts you can pick your hero from the archer, knight, witch, and wizard. In the beginning, you get the basic armor and low powers that are yet to be developed. With every successful round, you get generous rewards that you can spend on getting more powerful armors or renewing your powers.

You can also use different fighting techniques for each monster and combine your skills in any way you want. Besides, you can loot various items that will make you more powerful such as helmets, capes, rings, and more. You can also take potions to improve your health faster.

And lastly, Tiny Archers that aims you to save a kingdom with nothing but your bow.

The outstanding thing about this game is the perspective it has. So instead of seeing the fight from the top, the cam will be placed near the hero. Thus, you get to see the fight in detail and fully appreciate the graphics. You start with basic armors and powers and need to upgrade it while moving forward in the game.

Herewith, the game has a plot and there are four types of stories you can take part in. With each round, you face new and more powerful beasts with unique abilities you need to consider. Each victory brings you rewards that you can spend on developing your powers and getting new armor.

You can also pick the race of your hero and there are dwarf, elf, human, or beastmaster. The game also has more than a hundred levels so you won’t get over it that quick. You can also chat with other players and call them for help if you feel you can’t stand another monster wave.