It is fair to say, that the term “Mafia” involves some kind of a cool stereotype to us. Though the real Mafia is left somewhere in the past on the Amfari Coast, it is definitely more than alive in the video games and stays the eternal inspiration for the game developers.

If you are feeling like you’re up to something adventurous, then you can choose to play mafia. Which kind of game – it’s up to you to decide. If you are an extrovert and you like to chat with people, spend time with friends – then you can participate in an online game, strategy, or classical card game.

You may also like: 11 Best Offline War Games for Android

If you are more into adventurous stuff and like playing alone – you can choose those games telling captivating stories about how the interaction with Mafia has changed someone’s life.

Don’t miss a chance to become a part of a wide community of Mafia players. This game is a challenge for your strategic planning abilities, so join millions of other people who play this game and have the time of your life.

Any borders that existed before this game will vanish. All the world nations came to play, no prejudices. All together you will fight for the name of a Godfather.

Start a game and get involved in the crazy flow of action: robberies, chasings, races, sneaking – all is just to become the King of Mafia. The life in the game is extra harsh, you should stay tuned all the time or you lose. Even your best friends can turn out to be your worst enemies.

Fight for your ambitions and achieve your dream. Because it’s not only you who’s playing, but there is a huge network of gamers, the whole process feels really vivid and interacting.

There is something going on every day. In the game, you have a full 360 view so you can see all the details and be in control of what is going on. What is more, you can unite into groups, form your own team, and work on your strategy together. The game has one global server so all the people can join from all over the world.

There are several types of characters in the game and they all possess different skills and weapons. The higher the rank – the more dangerous is the character. You can make fights in a case when regular conversations don’t work anymore. So, prove your loyalty to the right people, follow your strategy, hide, and win! You may also like: 15 Free 3D Action Games Android & iOS

Many people are captivated by the image of the “City of Sin” movie, with all its spirit of darkness and brutality. Obviously, in real life you can’t live like that but who prohibits playing games? You will definitely catch the spirit of the gangster era. discover your alter-ego, will test your abilities to be sly and agile.

This is a multiplayer real-time strategy game. Cooperate with other users to win more points. Strive in order to become the boss of Maria, who controls all the territory and money.

You can develop your own mafia missions in cooperation with other players and organize mass fights. You will face random dangerous situations so you will have to play smart to adjust to unexpected events. Only the strongest will survive.

Not all the players will be your friends. It can happen that you are going to play against enemy groups, consisting of other players. With your own clan, you can form the most powerful syndicate in the city. Different gamers have different statuses. You should be mindful and take the best players and famous mafiosos in your time in order to win.

Don’t you forget that you have to collect the necessary tools, emo, and cash to manage your maria effectively. Prove yourself in regular events to acquire even more resources so your influence in the city can grow even faster.

You should also collect important rewards or drugs. Over time, your influence increases and your boarders are widened so keep your strategy on track. 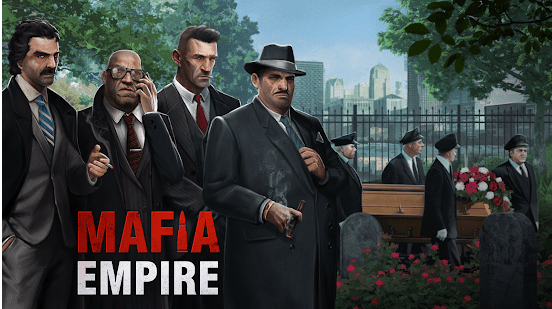 What can be more fun than gathering together with your friends to play the mafia card game? Or, sometimes it is also called “The Werewolf”. You can play in a small company or you can throw the total mafia game party – now that you have this app on your gadget – you don’t need to mess up with cards.

Just make sure everyone downloads this app and then you’re good to start. By the way, pay attention to the design of the cards. All the characters are depicted in a stylish and authentic way, for example, each civilian has the name – it definitely brings more personality to the game.

And the whole game process is totally customizable. You can add more characters to the game – for instance, a doctor, a policeman, a detective – the selection of characters is decent. The game is easy in usage thanks to the user-friendly interface – all the functions work semi-automatically and you get a feeling like an app simply reading your thoughts.

What is more, your mafia characters don’t have to be faceless anymore. You can choose the special card set with bright personalities – for example, with the Japanese mafia boss. Additionally, the game is accompanied by the sound effects for the better atmosphere. 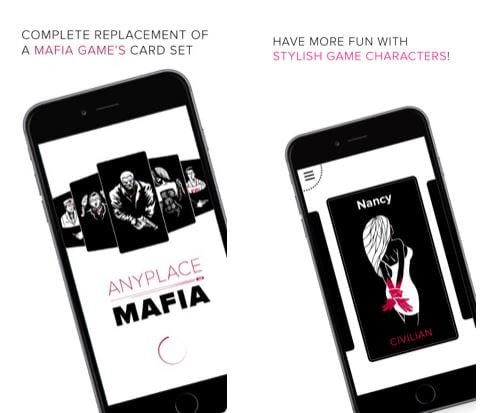 This is the strategy game, nevertheless, here you’re paying in a single mode. The graphics are very realistic and help to pass the feeling and charm of the mafia-style town. You must always stay aware – of everyone – other mafia clans, police, or other underground gangsters.

In fightings, if you have the best skills and weapons around, you will defeat your enemies and become the ruling mafia. In order to become the most popular mafia in the city, you need to complete all survival missions.

When you are just starting the game, play it wisely as a beginner, in order to complete survival missions. Be careful and try no to be caught by the police before you grow your clan to the peak.

Live an action-packed mafia life gang war in a stealth mode like mafia legends in City Mafia Gods game. You will discover a bunch of interesting missions and challenges, which you are surely want to try, Time will pass by really quickly 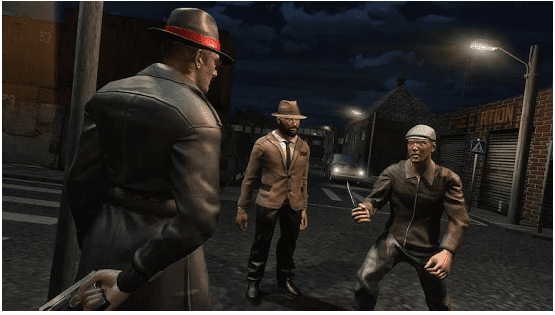 Do you remember all the fun playing Mafia with your friends? Guessing who is who was really fun, wasn’t it? And at the end of the game, the mafia was the person you least expect – quite shocking, right? Someone was a regular citizen, someone was a doctor, someone – a policeman, and somebody was lucky to be the Mafia!

So why don’t we put this spirit into a phone game? This game is exactly the version of a classic game, loved by the people around the world. A leader hands the cards and then it starts… The town falls asleep… And on and on and on.

After the town has wakened up – someone is dead and you have to find out who is the killer. Usually, you can never tell it from the first dight – you just trust your intuition (or the group instinct).

In this game, you can start your own investigation to find out the truth. When too many regular citizens get killed Mafia wins. So you have to plan in advance!

Actually, with this app you won’t need a narrator, you’re just getting involved. You can play with around 16 players, different modes. What is more – the game has a unique 15 roles, so you will definitely get something interesting.

The length of the game is customizable. Comparing this app to the previous ones, it is more simple, ut it brings you that amazing spirit of a game you used to play. Are you captivated by the brutal mafia games like GTA? Then you will definitely like Gangstar Vegas. It is really similar to the classic version of GTA and if you feel like you haven’t played enough in that game, you can explore this one as well. The whole game feels like you’re watching a blockbuster.

The best feature of this game that probably everyone will like the most is missions. Each mission pulls your thought into the game, telling your an exciting story of the main character. In total, there are more than 80 missions. What is more, Gangstar Vegas has its own online leader board and you can see the players all around the world on it.

Pass through the wild challenges, such as races, gang fights, shooting missions, auto theft speedruns, and many more. Another cool feature in Gangstar Vegas is its casino games. This is an aspect that the developers like to brag for having in front of GTA San Andreas.

By passing through the mission and getting the points you can upgrade your gangster making him more skilled and giving him the better guns. With updates added regularly full of fresh challenges, new vehicles, extra weapons, and more missions, your gangster career can become a permanent vice. 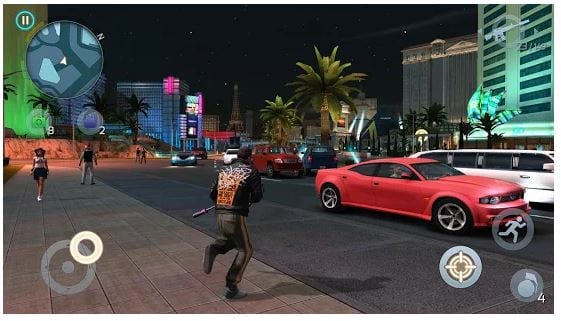 You may also like: 11 Free Online Card Games for Android & iOS

In this game, you will have to fight in a war and it is much more brutal than previous games. Your ultimate goal will be the last one standing. Each gang has its own unique styles of combat and it’s up to you to learn and using strategy out flank and outgun them. So if you’re into shooters – this game can become your next thing to try out.

In the gaming process, you can share your current status on social media in order to synchronize with your friends’ profiles. The game has a multiplayer system, so you can play all together and share our status in the world. Players are allowed to custom design their own personal gangster to fit their needs and send them out to cause mayhem and devastation.

For those who like shooter games, this would be a perfect choice. The range of the weapon is truly impressive and you can customize it according to your taste. You can, for example, choose different colors for it.

The graphics are also well-made and allows you not to miss even smaller details. The characters are easy to control and manipulate. Don’t focus on technical issues, just stay involved in the action! Step into the atmosphere of the battle and show everyone what you are capable of. 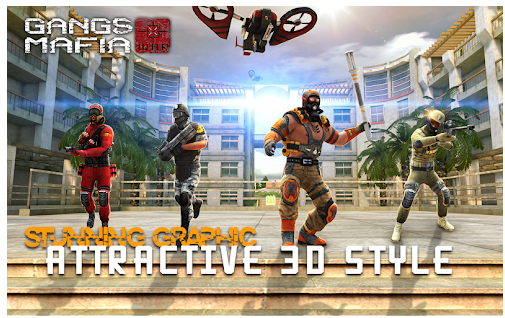