Number Run is an app that will help your kids practice adding numbers, subtracting, multiplying, and dividing, all in a fun and easy way.

Upon entering the application, you can choose the character’s appearance (boy or girl) and give him, or her a name. The game can have several characters, which is useful if you have a few children. 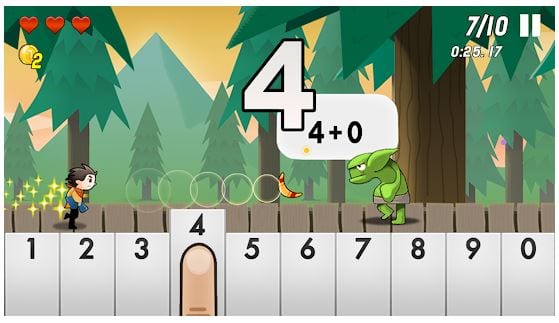 The character runs across the screen and meets banners with tasks like “3 + 1” (on an easy level) or “9 + 8” – on a difficult one. Tap on the desired number button at the bottom of the screen to select the correct answer. If the answer is correct, the character jumps over obstacles (cliffs), kicks the “monsters”, and does funny somersaults in the air.

Instead of a castle with a dragon at the end of the game, he or she encounters a chest with a skateboard. Moving on a skateboard, the character gains speed. 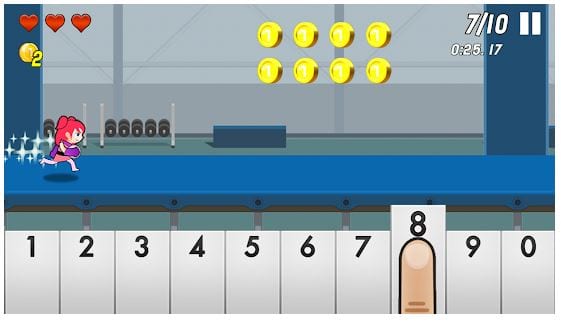 If you answered incorrectly, the character falls off the cliff and continues the game, having lost a skate (if he already has one), or one “heart” (He has several “hearts” from the beginning of the game). If you accidentally pressed the wrong answer, you can cancel it.

In addition to arithmetic problems, the character encounters coins hanging in the air. Then tap the button, how many coins there are. So the character collects coins. When he has accumulated a certain amount, he can “buy” another suit. Properties are attached to the suit. For example, “tracksuit” increases the speed of the character. 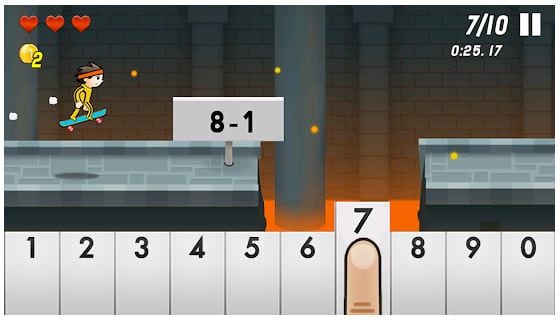 Adding is available for free. Subtraction, multiplication, and division require a small payment. The application is absolutely clear, does not require registration, has cheerful music and various landscapes of “worlds”. The developer replies to every message.

This is how a child can develop the speed of arithmetic operations in a fun and carefree way. An adult can get some fun also spending a few minutes with Number Run.