Do you want to experiment with your shots and give them an unusual look? This article has you covered.

There’re lots of trippy camera apps for Android and iOS that can help you take outstanding shots. Those apps have filters – from plasma and glitch effects to retro and artistic ones.

If you’re interested in double exposure effects, be sure to read this article.

Here’s the list of 9 best apps that category that worth your time. Have a look! 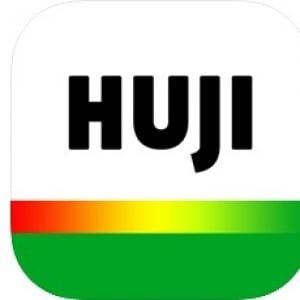 Let’s start with an app called Huji Cam. This is an app that empowers you to take retro-looking shots with nothing but your smartphone.

This app was all over Instagram a couple of years ago and it still hasn’t lost its popularity among users. This app basically makes your shots look like they were taken in the ’90s and it even has the date mark that old cameras used to have. All the shots you take with this app are grainy and have random sun glares.

Apart from most of the other similar apps, this one doesn’t allow you to choose filters by yourself or make any adjustments after the shot — everything is getting done automatically. However, you can make some adjustments before taking the photo. To be more precise, you can choose the quality of your future pic, add or turn off the glares and set a timer.

Plus, you can store the pics you’ve taken within the app and only save a couple of those on your mobile. Once you take the shot it will take some time for all the filters to develop. After that, all your shots will be available in the lab section of the app.

To crown it all, if you want to experience how your pictures would look back in the ’90s, be sure to try the Huji Cam app. 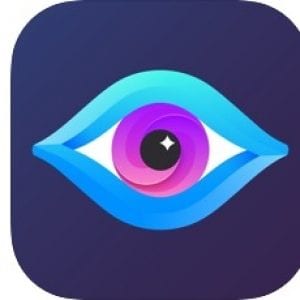 The second app on our list is called Trippy Effects- Digital Art & Aesthetic Filters. As its name supposes, this app gives your shots a psychedelic vibe.

Into the bargain, this app empowers you to apply filters while taking the shot to see how it looks with the conditions that you have. You can do it with the built-in camera in the app and can also use the slider to regulate the intensity of the preset. Some presets in the app are unpaid but there are some you need to pay for.

The app also has various texture packs that will add extra atmosphere to your pics. There are also acid corrections, various types of bokeh, and turn your shot into a piece of art. There’s also an ability to make collages and add quotes to your shots. Plus, you can modify the filter after your shot is taken.

To sum up, if you want to be outstanding with your shots, be sure to try the Trippy Effects app. 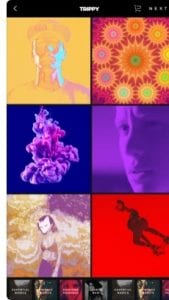 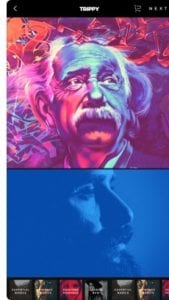 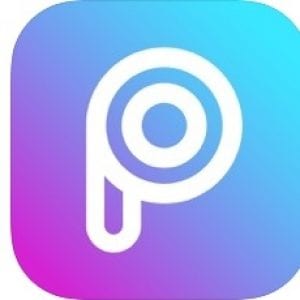 PicsArt Photo Editor: Pic, Video & Collage Maker is a widely-known photo altering app that you can also use to take unusual shots.

In case you’ve ever tried your powers in mobile photography, you’ve probably used this app. But as it is multi-purposed and has regular updates it can be used for retro and glitchy pics. The app has a massive collection of filters and notable effects than give your shots psychedelic vibe. To be more precise, there are acid looking filters, filters that add pixels to your shots and lots of retroes presets as well.

By the same token, the app has sketched overlay options that ads sketch contours of you or any other object on the shots. There are also various filters that make your shots seem like a piece of art. At that, you can try various illustration styles and modify the strength of each effect individually.

There’s also a collection of retro presets from the authentic 90’s cameras. Those even add the date marks to your pics like the old cameras used to do. This app word with subscription packs so, not all the presets and corrections can be used for free.

In the long run, if you don’t mind getting tons of extra featured for photo altering along with the trippy effects, pay your attention to the PicsArt app. 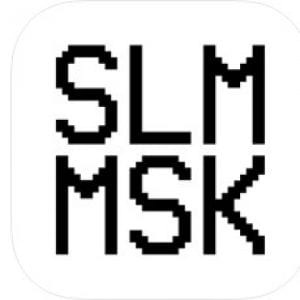 SLMMSK is a so-called anti-selfie app that grants you to take outstanding trippy shots. In case you wonder where the anti-selfie part comes from, the app has built-in face recognition instruments that grant you to twist your face, add pixels to it, or make it look like a piece of art or an emoji.

The app has a huge base of stuff you can add to your shots to make it extra and unusual -from basic VHS and inversion to pixelization and insane glitch. Along with that, all the pics you alter with this app will have a timestamp mark just like they were taken in the ’90s with an old-school camera. The interface of this app comes in one language but it is quite easy to assume how everything works so you won’t have trouble with that.

By the same token, the app has the ability to instantly share your pics on Instagram or Facebook with no need to save it to your phone first. As the app works in real-time you can see how the presets look and modify it to match your preferences. You can also modify the filters once the shot is taken.

To crown it all, if you want to get really creative with your selfies, give the SLMMSK app a try. 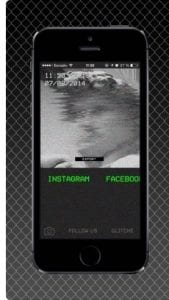 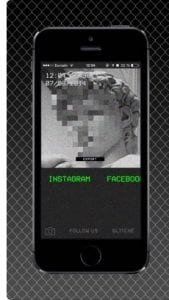 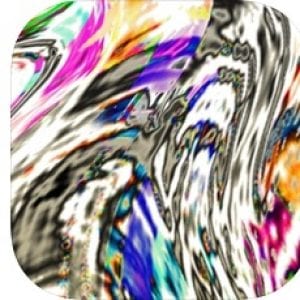 As you can see by its name, Glitch! is another app with unusual settings that can make your shots stand out.

What this app actually does is it gives your shots a glitchy vibe. Plus, all the presets and improvements you see in the ap can be added with just one tap. The app has various presets such as retro ones, VHS mode, vintage vibes,3D, and all that.

The app also empowers you to switch the quality and the size of your shots and do basic actions like mirroring and cropping. Into the bargain, the app also has a collection of stickers that match the vibe of the app in general. ePlus, you can even try to animate your pic with glitches, 3D, or even double exposure.

There’s also detailed pattern correction that grants you to play with the color scheme of your shot. Along with shots, this app also empowers you to record videos and GIFs and share those with your mates. You can also layer the presets and corrections to get extra creative with your shots.

All-in-all, if you want a trippy app to experiment with mobile photography, give the Glitch! app a try. 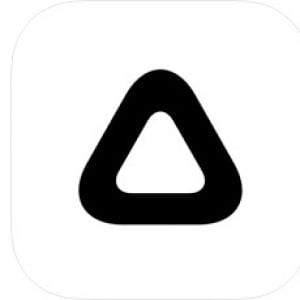 Prisma Photo Editor is a narrowly focused app that empowers you to turn your shots into a piece of art. The main purpose of this app is the transformation of regular shots into real pictures, but it’s different from the regular photo altering apps. Mostly because you can’t do much with the filters that the app offers, you can only regulate its strength.

Plus, all the filters can be added with one tap of your fingers. Along with that, the app has a built-in instant sharing feature that grants you to publish your piece of art n your social media with no need of saving it to your phone first. Apart from the fact that the presets in the app are vivid and extra the interface itself is quite minimalistic and doesn’t overload with buttons.

It also needs to be said that the app only allows you to work with pre-made shots so there’s no built-in camera. Besides, the process of transformation the pic takes a while so be ready from that. The app works on neural networks so the filters look great with any type of a picture, even with selfies.

Overall, if you’re into art and want your shots to match the vibe, pay attention to the Prisma Photo Editor app. 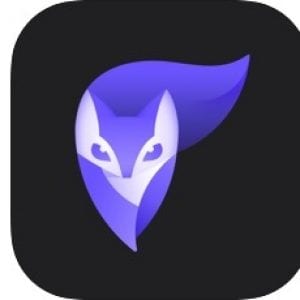 Enlight Photofox: Digital Art is an app that grants you to practice your creative skills in mobile photography.

The basic feature of this app is the ability to blend several pictures together and layer them. Plus, there’s a huge range of filters that were previously available in professional software only. That is why it’s not that easy to figure out how to work with this app and you’ll probably need to watch some tutorials to make sure you use all the instruments you could.

Along with the basic stuff like color correction, mirroring, and cropping the app offers you various unusual trippy presets such as glitch. VHS, acid filers, pixelization, and even retro presets. The retro presets include the grainy look, glares, and even a timestamp mark that we used to have in old-school cameras. You can also add stickers and try artistic effects that you would get from the Prisma app.

Plus, there are lots of opportunities for experimenting with double exposure tool. There’s also a warping effect that works amazing with landscape pics and gives them an unusual surreal look. In case you want to go a bit crazy with filters there’s a whole collection of psychedelic filters.

To sum it up, if you want your shots to look trippy and surreal, try the Enlight Photofox app. 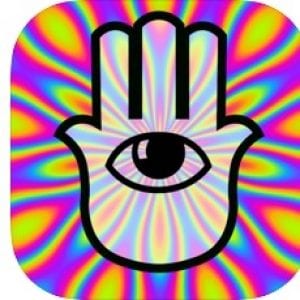 As its name supposes, Psychedelic i-Camera is an app that gives your shots a surreal look. The main goal of this app is to be as trippy and fun as possible. Apart from adding crazy tools to pre-made shots, you can also take pics and record vids right in the app as it works with AR technologies. There are various psychedelic rainbow effects that you can customize by playing with its color schemes.

You can even add your own colors to the psychedelic effects. Along with that, the app includes 3D filters, VHS, glitch, plasma, and other artistic stuff. You can also choose the part of a photo or a video that you don’t want to add filters on. Plus, there’re lots of instruments of working wit selfies- from artistic filters to pin-up ones.

You can also record put a timer for taking a shot, change the size of it, and mirror it if needed. Besides, there are some advanced camera settings that grant you to change the angle of your pics and all that. However, the app includes ads so keep it in mind.

In the long run, if you want to experiment and get crazy with your shots, try the Psychedelic i-Camera app. You will like it!

You may also be interested in that: 11 Overlay Pictures Apps for Android & iOS 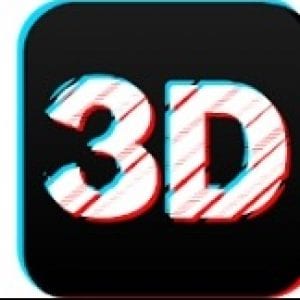 And last but not the least, 3D Effect- 3D Camera, 3D Photo Editor & 3D Glasses is the app that grants you to add multiple 3D filters to your shots.

With this app, you can easily add 3D filters to your shots and customize it to match your preferences. This app doesn’t have much basic color correcting and saturating instrument and every effect can be added with just one tap. At that, you can only regulate the intensity of each effect if needed.

Plus, you can whether add filters to pre-taken shots or take new pics with a built-in camera. The app has two modes – the normal and the rad one. The normal one is for basis 3D filter and 3D art one and it allows you to see the filters while taking a pic. The rad mode is for the pre-made shots that you can import from your camera.

With all the effects in this app, you can modify the direction and make it go left, right, or diagonal. You can also adjust the distance between the effects and choose its color scheme – from regular combinations to the rainbow effect.

To crown it all, if you want to give your shots trippy 3D vibe, use the 3D Effect- 3D Camera app. 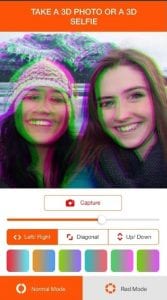 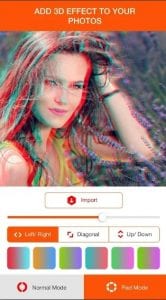