For example, you want to play a prank on someone, or you want to make a fake call to one of your friends. In this case, you will definitely need to resort to a special application. For example, 11 Free prank calling apps for Android & iOS 2019.

In our selection, we have collected for you the best programs to change the voice from male to female. Also in them, you can change the tone of the sound, say phrases with the voice of celebrities or politicians, and perhaps even impose certain special effects on the recording.

Thus, you get an opportunity not only to play a prank on the person you are talking to but also to really surprise him, have a little fun during a standard dialogue with a friend. So, we present you 9 Best Male to Female Voice Changer Apps for Android & iOS. 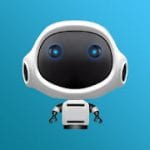 Voice Changer is one of the most popular and demanded applications among users. Its job is to apply sound effects to your voice or your friend’s voice, which in the process turn the audio into something unusual.

It’s worth noting at once that Voice Changer works exclusively with voice recordings – you won’t be able to change your voice right during the dialogue.

The application has a very simple interface, in which you will do all the necessary actions. For example, you can record a phrase or conversation right away by going to the desired tab on the home screen.

It also shows you that you can view all your saved and modified files, open a certain entry, and much more. Next, you’ll see a whole list of effects – for example, children’s voice, male, female, choir, and others. You will just have to listen to the audio in different handsets and choose the appropriate one. 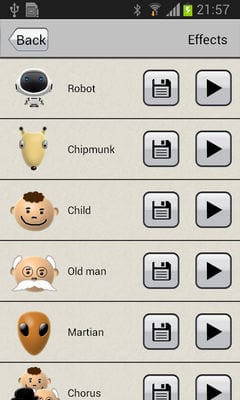 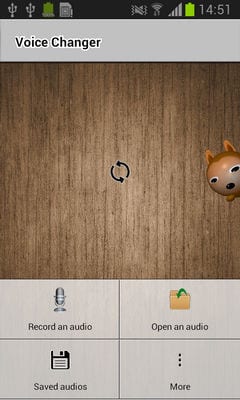 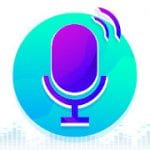 If you need to change your voice right during a call, the Voice Editor is what you need. This application will help you to become one of the amazing characters, choosing your sex and voice respectively.

Here you can find even the voices of superheroes and use them when editing audio recordings or in real-time. By the way, you can record your voice directly in the Voice Editor – and then already send it as a voice message to one of your friends.

In the application, you can also process audio files that are already in the memory of your smartphone. You can easily cut out the desired moment and paste it into the editor.

In addition to the fact that the Voice Editor offers the ability to change the voice from male to female, you can also talk as a certain character. For example, it is easy to become a Batman or a character from Marvel by simply selecting a certain option.

Voice Editor will even allow you to create your own melody or ringtone, using the recording of your voice. 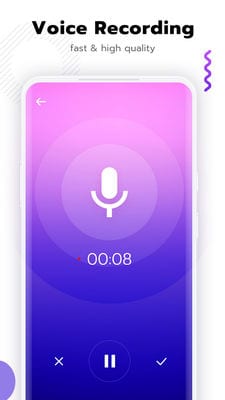 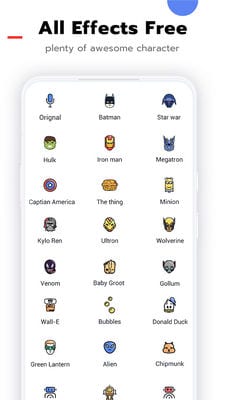 Voice changer with effects by Baviux 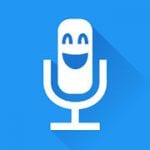 Voice changer with effects by the number of downloads and ratings from users is an undoubted favorite and leader among such applications. There are almost 50 effects with different functions that will change your voice beyond recognition.

You can become a man of mystery by talking to people with different voices. Will they be able to guess whether you are a man or a woman? Will your real voice be determined?

In order to start working with your voice, you will need to record it on the recorder. You can do it directly in the Voice changer with effects without making too much effort.

Recording in the future can be saved in the memory of the smartphone at the source, and then you will work with more precise settings. So you will be a robot, a monster, a man or a woman, a drunk person, and whatever you want!

Received record directly from the application, you can immediately send friends via WhatsApp and start the fun with them. You can even set it as a notification sound! 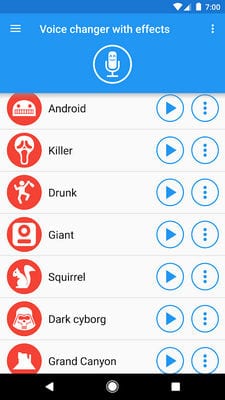 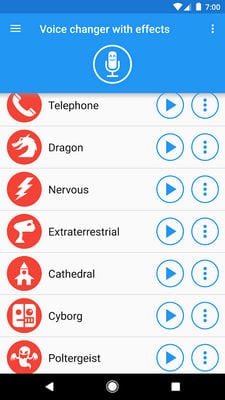 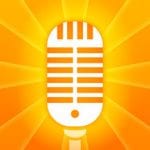 As you know, male and female voices have different heights, tones, and many other factors. With Voice Changer Plus, you’re not asked to change your gender, but rather to adjust how much you change the tones or heights.

The application has many different effects, among which you can even find the background sounds. The most horrible and funny thing at the same time is the squeak of a mosquito. With this effect, a piercing and annoying squeak will be applied to the whole audio recording with your voice.

In order to choose from dozens of different effects, you will need to record your voice. To do this, simply press the record button and start talking, singing, or playing sounds. 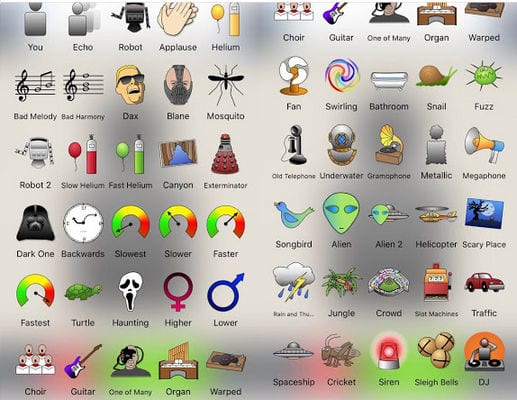 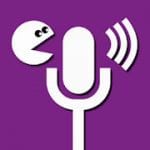 If your goal is to change the voice of your favorite singer or vocalist, as well as work on recording your voice, you may be interested in the application Voice changer sound effects. Here you are invited to work with pre-recorded sounds by simply downloading them from your smartphone.

Of course, this application will need access to the memory, and it will ask for this permission just before installing Voice changer sound effects on your smartphone.

There is no loss of quality in the processing of your voice or song – and this is very important if you want to play a plausible joke on someone. The Voice changer sound effects have amazing effects that turn your voice into a completely different person’s voice.

In order to listen to the recording beforehand, you will simply run it directly in the application, trying different effects to complement and change the sound. Become a chipmunk, a girl, or even add a little squeal to your speech – just choose the appropriate options. 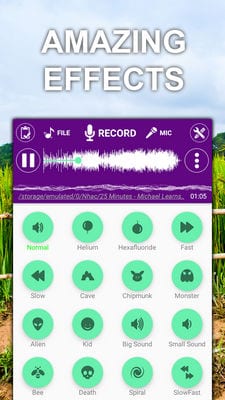 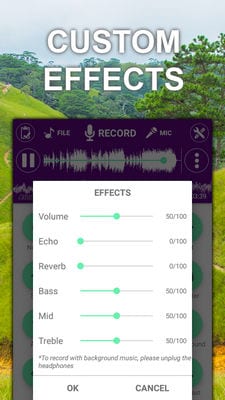 You may also like: 11 Best Soundboard Apps for Android & iOS 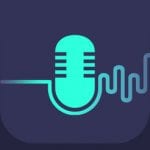 Your voice messages to your friends can become very unusual. All innovations you can add to the Voice Changer App, which gives users the opportunity to fundamentally change their voice.

It is worth noting that the application has a cool and user-friendly interface, which is optimized for all smartphones. You will also be pleased with the number of proposed effects, which you can immediately try out in practice.

Voice Changer App will allow you to change your rough voice to a more melodic and even similar to a woman’s. If you can’t make all the changes at once, just save the recording. You can continue the editing process later, at a more convenient time for you.

Voice Changer App allows you to send audio to your social networks, offering you a choice of one of the applications installed on your smartphone.

Your limit in the process of change will be only your imagination and desire to surprise your friends. We recommend you to try all possible effects first, and then make a decision about changes. 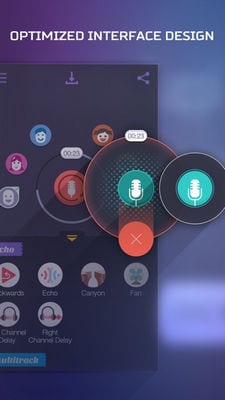 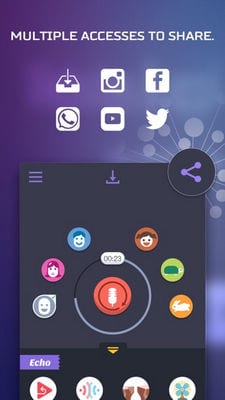 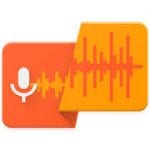 VoiceFX is both a handy mobile voice recorder and a voice editing application. You will be able to change your recordings from the voice recorder or songs from your smartphone in just a few clicks and get great results.

As you work on your sound, you will always be able to listen to the intermediate variant and change something immediately, without waiting for the complete editing.

Your own modified voice with VoiceFX can be streamed to a browser or media player. This gives you the chance to use your modified voice in real-time, impressing your friends and subscribers with the way you’re currently talking.

VoiceFX allows you to choose whether your voice is female or male, childish or old, drunk, or slow. You can record your voice directly with effects, listening only to the result you get. Of course, when you’re done, send the recording immediately to your friends and try to play them out. 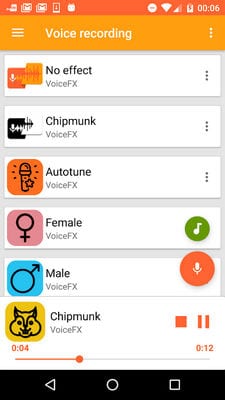 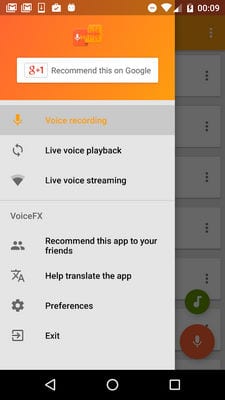 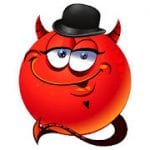 Do you want to try on someone else’s voice right during the call? Perhaps you want to impersonate someone else by playing a trick on your parents or friends. MagicCall can help you do this by making calls as you’ve never made before.

The application works with your voice in real-time, and the person you’re calling hears only the final result of the processing. Believe me, your friends will be shocked when you call them and speak with a female voice.

MagicCall offers you to become a man, a child, a woman, or a cartoon character. You choose how your voice will change and what the interlocutor will hear. Also, MagicCall can sound smileys – for example, a kiss, a punch in the palms, and much more.

All playback takes place during the conversation, so you can improvise in the process. With each update, new voices are added, which you can use every time you talk to your friends. 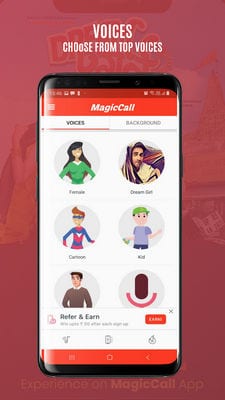 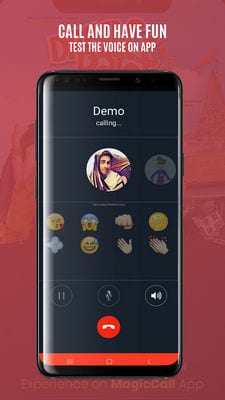 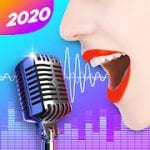 Sometimes your singing abilities can be terrible. Perhaps you can change this with the Voice Changer Voice Recorder. If you’re a man and can’t sing, there’s a chance that by changing your voice to a woman’s, you’ll become an incredible singer.

With a variety of effects, the Voice Changer Voice Recorder can help you change your voice or improve it in just a few clicks.

For phone calls or voice messages in messengers, Voice Changer Voice Recorder supports a variety of funny and unusual voice effects. You just need to select a specific voice from a list, during which to record a message in the messenger.

You can choose not only to change the sex but also to become a real Devil, robot, alien or great singer. Just try it and you will not be able to stop! 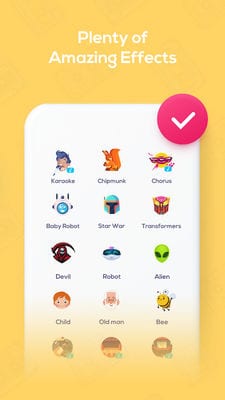 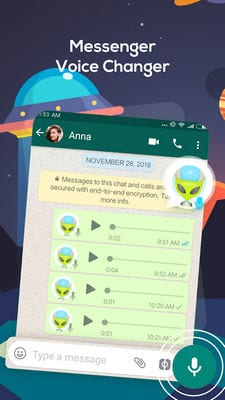 We would like to warn you that you should not use voice changer functions for fraudulent or criminal purposes. Firstly, real experts will always be able to figure out and understand what your voice is in reality, and secondly, it can lead to punishment.

Most of these applications are designed for entertainment and fun. With their help, you will talk strange, unusual for yourself or funny voices while having fun with your friends.

From the 9 presented services, you can choose several at once and install on your smartphone – so the variety of voice options will be more. We hope that our article was useful for you and you could find the right application.