Morse code is one of the proven methods of communication. It is based on different signal sequences. Morse code looks like dots and dashes in writing. You will dive into a fascinating world in which words and sentences look like mysterious lines.

Sometimes we want to learn new skills. Morse code is an excellent way to learn something new. You need to train a lot to master the Morse code.

Many apps have been developed to help you translate, learn, type, and interpret Morse code. We have prepared for you a list of the best Morse code apps. Try them and you can become a real expert in Morse code.

This app has a great Morse code translator. You don’t need to think long and translate your text. You will receive an encrypted text in real-time. The app will help you translate vice-versa. You can also try 15 free wifi texting apps for Android & iOS to send your secret messages.

It requires permission to access your flashlight so that you can see the translation in the form of blinks. If you want even more realism, then turn on the sound and vibration.

You will feel like on an aircraft carrier because you will be surrounded by the technical sounds of Morse code. Copy the translation result and share it using social networks or send it to your e-mail. 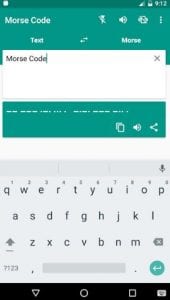 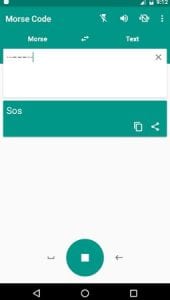 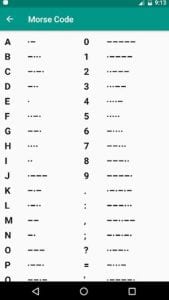 This app is useful for those who want to learn a secret language. You can also have fun on this app. It has a simple design and an intuitive interface. The app has been downloaded over 500 thousand times. Try it and you can learn Morse code.

You may also like: 11 Best Animoji & Memoji Alternatives for Android & iOS

This app will allow you to quickly learn the Morse code. Type any text in a special line and the app will translate it. The app will use the flashlight on your smartphone. Your messages in Morse will be visible from everywhere.

The app can voice your messages. You will hear a series of short and long sounds. Text translation takes a few seconds. The app won’t keep you waiting long. It will also help you create audio files with Morse code recorded.

Don’t forget to listen to these audio files to train your skills in this difficult language. Open the Morse alphabet in the app and try to remember the translation of each letter. You can learn tips for better memorizing Morse code.

Try a new feature – communication with ghosts. You will be very interested.

The app has a customizable interface. Select the background color, size, and font of the text. The app has a user-friendly design with an intuitive menu.

You can try the premium version of this app. You will get more features and useful tools for translating Morse code. The app has special tests to test your translation skills.

This app will help you learn Morse code. It has several modes for memorizing. Choose the one that suits you best. You can fully customize the app. Select the type of text input. The app has several options such as telegraph and keyboard.

Test your Morse code with sound, vibration, and flash. If you want to improve your Morse code skills, then increase the playback speed. You will notice how you begin to better understand the code.

The app allows you to track the statistics of the study of each letter. Open special charts and see where your strengths and weaknesses are. You can learn Morse code in stages, starting with the introduction. Each stage becomes harder and harder. 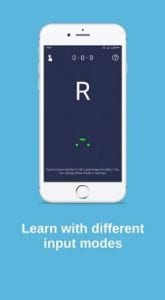 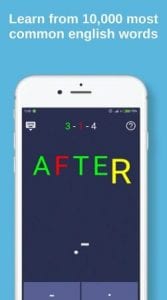 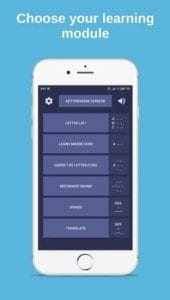 Take the tests to answer questions with multiple or short answers. This boosts your skills. This app will allow you to learn up to 10 thousand English words in Morse code.

Play a game where you need to guess a word or letter by sound. The app has many tips. Use them wisely. The app has been downloaded over 100 thousand times. it doesn’t take up much space on your smartphone. It weighs only 12MB.

If you want to learn a secret language, start with the Morse code. You can become a real expert. This app will allow you to train secret sings and sounds. You can copy the translated text and send it using any social networks.

The app converts the translated text into an audio format. You can add some kind of translation from the list of favorites, so as not to lose. This app will help you quickly learn Morse code.

You will be able to learn new combinations of symbols and signs. The app has 8 different games for effectively memorizing the Morse language. 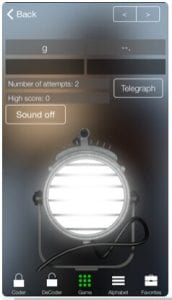 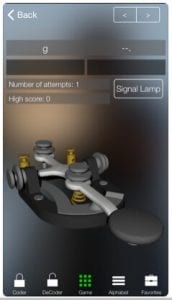 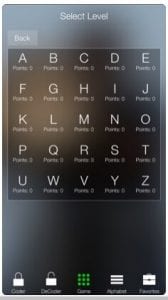 The app has a built-in Morse code. You can find out what a single letter looks like. The app will show you the sound of each letter.

Try playing a game to guess the letters by sound. This fun app will be your great helper in the world of Morse code.

If you urgently need to translate the text into the Morse language then this app is exactly what you need. Just enter the text and the app will translate it in seconds. It uses flash and vibration to visualize.

You will feel like a real professional because you will understand everything. Turn on the Morse signal in the settings. You will hear words and sentences in Morse. It will seem to you that you are a secret agent.

Customize the speed and pitch. The higher the playback speed, the more difficult it is to understand Morse code. This is a great way to train your comprehension and listening skills.

The app has a keyboard for entering text and signs. A long press is a dash, a short one is a dot. 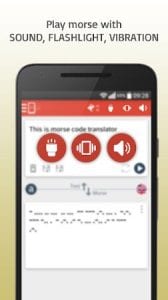 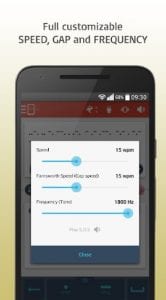 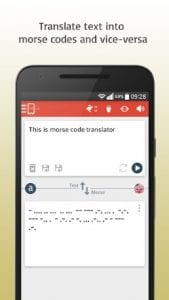 You can save Morse text to the gallery and share it with your friends. If you have an emergency, use the circle mode.

The app will repeat over and over the same sentence or word. Developers continue to update the app. It has been downloaded over 500 thousand times around the world.

This is a simple app that will allow you to quickly learn Morse code. You can practice your skills every day. Try to go through 3 different difficulty levels. Each level has unique tasks and questions.

The app will allow you to practice signs, sentences, and whole texts. You will become a Morse code expert. The app will also help you convert text to Morse language. If you are in an emergency, you need this app.

You can transmit Morse code in several ways. The first is using the flash of your smartphone. This method is most effective at night.

The second way – using the blinking screen. The third way is to display messages in Morse code using vibration. This way is suitable for those who want to quietly transmit a message.

The fourth way is to use a sound effect. You can combine Morse messages.

The app has a convenient and intuitive interface, as well as modern design. This app contains all the functions and tools for Morse code.

You won’t see annoying ads. The app won’t distract you from learning Morse code. Use this app as a tutorial. It doesn’t take up much space on your smartphone. It weighs only 31.7MB.

You may also like: 11 Free Learn to Code Apps for Android & iOS

If you urgently need to transfer sentences from Morse code, then this app is perfect for you. It has a minimalistic design. This app has nothing more. It will translate your English letters into Morse code.

The app works in offline mode, so you don’t need to worry about the Internet connection. You can open the alphabet table and repeat how the letters are written and sounded in Morse code.

The app also has translated basic and important phrases. You can immediately find them. 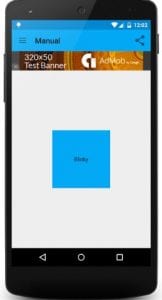 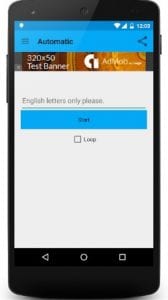 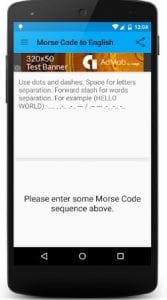 Open the settings and personalize the app. You can turn the sound and vibration modes on or off. If you need to use Morse code in the dark place, turn on the flash.

You can also adjust the duration of the signals. This app has been downloaded over 100 thousand times. Try it and you can learn all the basics of Morse code.

Do you want to have a fast Morse code transmitter? This app will help you read any text that is written in Morse code.

The app uses the microphone of your smartphone to record the sounds of Morse code. You will quickly receive a translation. If the app doesn’t work correctly, then you need to write to the developers about it. 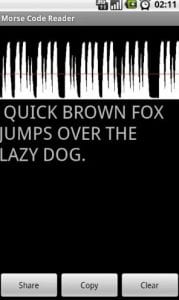 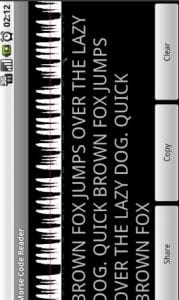 The app has a very simple design. It has one function that it does a great job of. The app weighs only 20KB and doesn’t affect the performance of your smartphone.

It doesn’t work in the background and requires only one permission. This is a permission to use a microphone. The app has been installed more than 100 thousand times.

This app will help you train your Morse code skills and abilities. This is a great challenge game that has a well-defined plan for learning Morse code. 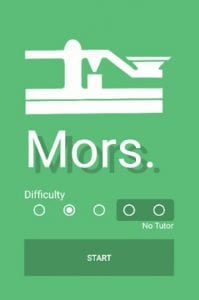 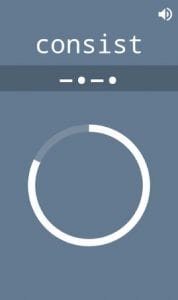 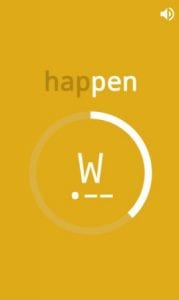 The app has a bright and intuitive interface. The higher the difficulty level, the less time you will be given to think. This is an excellent Morse code skills trainer.

If you want to repeat a specific letter, open the alphabet in the app, and find the letter. The app has been used by more than 50 thousand people.

This app can play Morse code in 4 versions. It is a text, sound, light, and vibration form. You can customize the sound playback.

Increase or decrease speed. So you can understand your level of Morse code. Use this app as a translator. It quickly translates and recognizes text. This app is a great way to learn Morse code 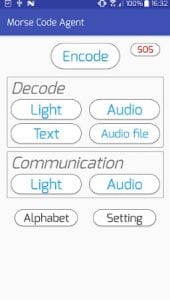 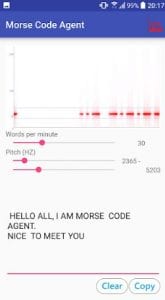 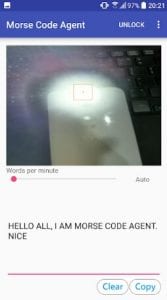 This app can understand Morse code using flash. If someone flashes a message to you, this app will help you translate it. The app allows you to choose the language of the alphabet for translation.

It doesn’t take up much space and doesn’t work in the background. This will save the charge of your battery. The app weighs only 3.3MB. It has been downloaded over 100 thousand times.

You may also like: 15 Free flashlight apps for Android & iOS

This app generates Morse code. You can immediately share any words and sentences with your friends. The app also has tools for training skills. Choose a type of practice.

If you choose a test, you can choose the number of questions. If you want to develop listening, listen to words and sentences, and translate them. The app has a huge selection of questions and test options. 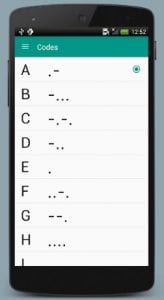 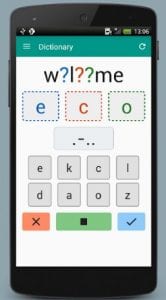 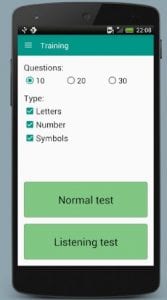 Developers continue to update the app and add new features. The app requires several permissions such as storage and microphone. This app is safe.

It can work without an Internet connection. The app has been installed more than 100 thousand times around the world. Try it and you will become experts in Morse code.