Trance music has always been something that is different. Although this music was associated with people being high for a long time it’s more than that. Trance music aims to relax you and help you get rid of stress.

There are lots of free trance music apps for Android and iOS that gives you unlimited access to your fave music. Some of these apps have huge trance music compilations, some cover live radio broadcasts, and some even post news related to the genre.

Here’s the list of 7 best apps that category that worth your time. Have a look!

Let’s start with an app called DI.FM. This is an electronic music platform that empowers you to stream music.

The main aim of this app is to satisfy all the electronic music lovers out there. The app has a huge compilation of audio files in various electro categories such as trans, lounge, techno, and more. Plus, there’s a whole category of DJ sets and the sounds that aimed to help you to relax. You can also listen to exclusive DJ sets before others.

On top of that, the app has lots of mixes and playlists made by producers, DJs, and other people respected in the industry. There are also mixed made by other users and you can drop yours as well. When you start using the app you will need to mark the genres you like the most and the app will pick up the music for you.

Wherein, the app covers more than a hundred radio stations that stream 27/7. The app can also sync to your car’s audio system so you can listen to your fave music while driving. Therewith, there are regular live DJ translations in the app.

You may also check: 15 Best DJ Apps To Rock Your Party for Android & iOS

The second app is called the Internet Trance Music Radio and it’s a platform for live trance radio channels.

The central goal of this app is to provide you with the music of your fav genre 24/7. The app is fully committed to trance music so you won’t hear any other genres in there. Thereby, all the music here is good quality with no glitches and you won’t be disturbed by signal crashes as well.

The visual of this app is quite slick with the black and red theme. It looks a bit old-school, to be honest, but you don’t really look at the screen while listening to the radio, right? When you open a broadcast you can see the number of current listeners, the name of the current bit rate, and if you’re using Wi-Fi or not.

The app also shows you the amount of time you spend listening to the radio every day. Herewith, you can see the previews of the upcoming broadcasts and follow them to get a notification when it’ll start. You can also choose the bit rate of the music and view the feed with broadcasts you might like. 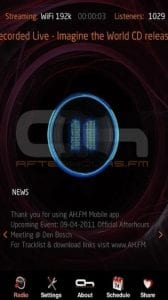 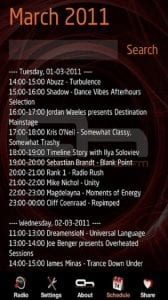 As its name suggests, Radio Trance Music is an app that empowers you to listen to radio broadcasts relates to trance music.

The apps pick out the best quality trance-music broadcasts from all over the world and serve them to you. It needs to be said, there are some other genres covered by the app — techno, electro, dance music, and more. Plus, the app only gives you broadcast with quality-wise signals so you won’t be annoyed by crashes.

The app has a simple visual and it’s easy to figure out how to use it. You can skip the broadcasts you don’t like and add the ones you enjoy at your faves. Besides, you can filter all the channels to only see the music genres you’re interested in. You can see the number of listeners for each broadcast and the type of bit rate.

Wherein, you set up the type of Internet connection you want the app to use. You can also filter the bit rate type you’d prefer to listen to. The app also posts the broadcast schedule you can view. If you’ll see the streams you don’t want to miss you can set up notifications for them. Furthermore, the app is lightweight so it won’t overload your device’s memory. 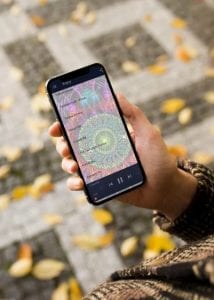 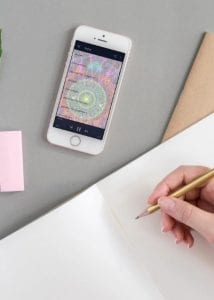 Techno Trance is an app that empowers you to listen to the best trance music broadcasts out there. The visual theme of this app is black with acid buttons so it might annoy you a bit. However, this app is aimed to give you amazing audio files so the visual part is not that important. For now, the app covers more than 700 radio channels and almost 40 music genres. Along with trance, the app also has rave, house, lounge, hip-hop, dubstep, heavy metal, and more.

On top of that, the app has to media-players -the classic and the turbo one. Thus, if you don’t like the sound you can just switch the player. The app also covers various bit rate types and you can sort the broadcasts by it. Wherein, you can alter the look of your media player — you can change the font, the image in the back, and the colors.

Furthermore, you can filter all the stations by the genres they stream. You can also add the ones you like to your faves. The app has the radio channel schedule with all the upcoming broadcasts. You can mark the ones you’d like to listen to and set the reminders to not miss them. 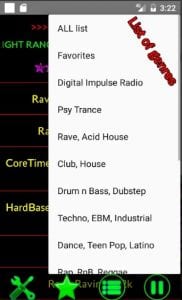 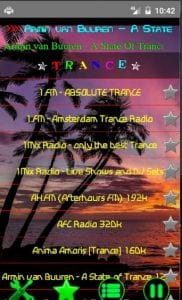 Free Techno Radio is an app that empowers you to listen to the best broadcasts related to trance music.

The app covers various radio channels that provide you with music 24/7. Wherein, the app aims you to give you the best quality possible so there won’t be any annoying noises and signal crashes. The app also covers some other genres like techno, lounge, electro, and more.

All broadcasts in the app are live so you can set up notifications for your fave ones to not miss any. Therewith, the app has a broadcast schedule that gives you a preview of upcoming broadcasts. You can set up reminders for those too. The visual of the app is quite slick and minimalist so there’s nothing outstanding here.

Herewith, you can skip the stations and add the ones you enjoy to your faves. You can also filter the stations by the genre or the bit rate. Plus, you can view how many people are listening to the same stations as you are as well as see the amount of time you’ve spent listening to each broadcast. 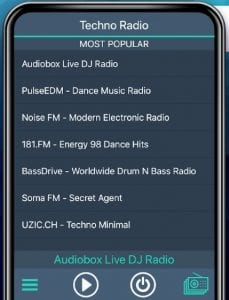 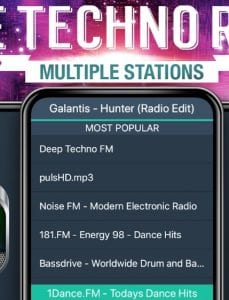 EDM Songs is an app that aims to bring joy to all the trance music lovers out there.

The app has a huge base of music that you can listen to for free. You don’t even need to load any of the files on your device but if you will you’ll be able to listen to them offline. Plus, the app also empowers you to watch trance music vids. You can even change the streaming quality of the sound according to the network speed you currently have.

On top of that, you can add some songs at your faves for easy access. You can also make your own compilations by themes or whatever else. As was already said, the app has lots of songs, and its amount is also constantly updating so you’ll always have some fresh sounds.

The app covers some other music genres like techno, electro, lounge, and more. You can filter the music compilation by genre, by the DJ, or even by the country it was recorded. The app is free and there are no annoying ads. 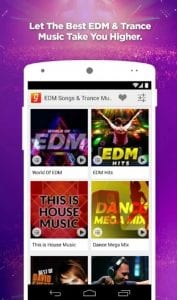 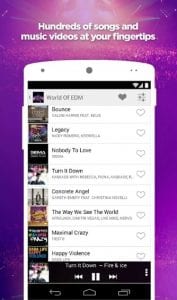 And lastly, Trance Music Free is an app with a huge compilation of trance music.

This app is made by the genre’s fans so it covers all the latest trance music. Plus, the app has a full-on feed with the latest news of the industry. There are schedules of the upcoming trance music events, the interviews with the DJs, and lots of other interesting stuff.

The music collections are getting updates every day so you will always have something fresh to listen to. Herewith, you can mark all your fav songs for easy access. The app also works in the background of your device so even if your screen will be locked the music will still be playing.

Plus, the app covers the best radio channels dedicated to trance music and you can listen to it 24/7. Besides, you can filter the songs by its bit rate if needed, and all switch the quality of the sound according to your current network speed. The app also has the pro version that turns off ads and empower you to set notifications. 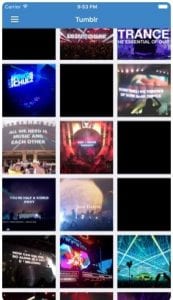 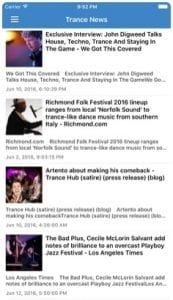