Do you enjoy pranking your friends and want to take your jokes to the whole new level? This article has you covered!

There are lots of fake text conversation apps for Android and iOS that empowers you to simulate text messages. These apps generate realistic dialogues that you can use to joke on your mates or to get yourself out of the uncomfortable situations. The apps are fully customizable and some of them even simulate the dialogues in popular messengers.

In case you’re also interested in generating fake emails, be sure to read this article.

Here’s the list of 5 best apps that category that worth your time. Check it out!

Let’s start with an app called TextingStory Chat Story Maker. This is a chat simulator app that empowers you to create plausible fake text messages.

The first thing that needs to be mentioned, this app is made for entertainment purposes only so that you could prank your mates and relatives. From the first look, this app looks like a usual messenger but the difference is you can switch between characters by tapping on their names. You can create full-on profiles of the characters with the images and the descriptions.

Into the bargain, the app has a share screen tool that you can use to share the screenshots with the people you want to prank. You can even record screen videos so the whole conversation will look even more realistic. Plus, the vid you record will automatically be quickened to look more stable and believable. You can also automatically share the vid or post it on social media.

Therewith, the app doesn’t add a watermark on the screenshots and vids so no worries about that. The vid is getting done quite fast as well — no longer than a minute. You can customize the look of your dialogue by changing the background and the color scheme of a conversation.

In a nutshell, if you want to joke on your friends by creating fake text conversation, be sure to give the TextingStory app a try.

The second app is called Fake Message Free 2020 and it is also made for creating fake chat dialogues.

Along with the previous app, this one looks like a stand-alone messenger. And once again the main goal of this app is to simulate the most believable chats possible. Thus, every little detail in this app can be modified. You can change the color scheme of the dialogue and switch backgrounds of it. Plus, you can fake the chats list page by adding as many fake dialogues as you want.

The app works the same as its sister apps so you can switch the characters and create a full-on conversation with imaginary (or not) people. There are two options for send and received messages you can fake — SMS and MMS. Thereby, you can not only write text messages but also send pics and vids to yourself.

By the same token, the app empowers you to change the timetable for as long as you want so you can use the same teat layout over and over again. The app has a built-in screenshot tool that can send the pics directly to the person you want to prank. You can also screen record the conversation for it to look even more realistic. There’s even the ability to speed up the vid if needed.

All in all, if you need to fake massages for any purpose, give the Fake Message Free app. 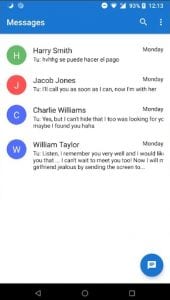 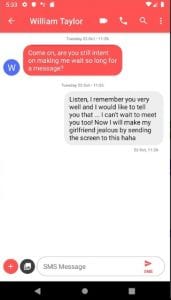 FakeChat Maker is another app for faking text conversations on your mobile device. The app empowers you to generate any dialogues between any two people you want. The interface of an app looks like a regular messenger the only difference is you can switch the characters and write both send messages and the received ones. You can also send videos and pics in the dialogue. Besides, you can create a fake dialogues list page so everything could look even more real.

The app has a screen share tool that empowers you to share screenshots with the people you want to joke on or trick. But above that, you can also record extra realistic screen videos. These vids include the typing and even the keyboard preview for the character who’s receiving a message. You can speed up the video and also start recording it on the dialogues list when the notification pops up.

Into the bargain, the app permits you to customize all the details about the dialogues for it to match your preferences. Thus, you can change the color scheme and the background of your chat. You can also choose to give the person you’re texting with the name or a number that will show up on the dialogue. You can even add his/her profile picture.

To crown it all, if you want to have fun with faking text messages of any kind, try the FakeChat Maker app.

As its name supposes, Fake Chat Conversations is a chat simulator app that you can use to send fake messages to yourself.

Apart from other apps form our list, this one doesn’t allow you to fake dialogues in some random messages. This app is made specifically to fake WhatsApp conversations. Otherwise, it has all the same features as its sister apps. You can switch between characters and send both SMS and MMS messages. Furthermore, you can send fake voice messages to yourself and even fake calls!

Into the bargain, you can create a full-on profile for your imaginary (or not) character. You can add a profile image and give him/her a name or leave it as a phone number. All the details in the app can be customized – from the color scheme to the background image and the dark mode. You can even change the timetable for all the messages over and over again.

The app supports all the emojis that the original messages do so no worries about that. As for the fake calls, you can also modify the number of missed ones if needed. You can even adjust the chats list page and add as many fake dialogues as you want. Once you’ll be done with your fake conversation you can take a screenshot and send it directly to the person you want to prank.

To sum up, if you’re interested in faking WhatsApp text messages, be sure to try the Fake Chat Conversations app. 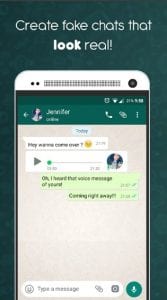 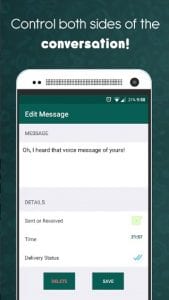 And the last but not the least, Yazzy Simulator (Fake chat) is an app for faking text messages and more.

This app is more than just a message simulator, it is made for faking everything you might want to fake. However, the app is made for entertainment purposes only so you can use it for pranking or to get yourself out of uncomfortable situations. So here’s what you can fake with this app above text conversations — Facebook statuses or photos, fake tweets and translations, fake Instagram posts, and even system notifications.

As for all the posts and fake photos, you can adjust the number of likes, shares, and comments including what these comments say. All the options for faking are fully customizable so you can make it look as realistic as possible. When it comes to screenshots, the app empowers you to send the images directly to the people you want to prank. All the screenshots will ave a watermark but it can easily be removed.

The fake text messages feature is the same as its sister apps. Thus, you can adjust send and received messages, create a character’s profile with the picture and modify the timetables of the messages. You can also change the color scheme of the dialogue and its background. Once you’re done you can take a screenshot or record a vid of your screen.

In the long run, if you enjoy pranking your mates by faking some stuff online, try the Yazzy Simulator app. 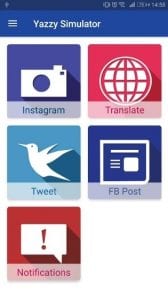 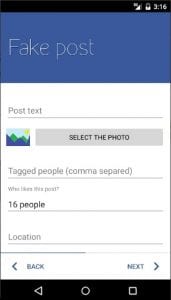